Due to the ongoing COVID-19 situation, SPAC has decided to cancel “Antigone” which were both scheduled for the Golden Week holiday period in May. We are very sorry to have to make these announcements, which have been made unavoidable by the spread of COVID-19 in Japan and a request by the national government to avoid all travel that is not urgent or necessary.
SPAC staff will be contacting everyone who booked tickets with a view to refunding monies between April 4 and May 10.
Above all, however, we look forward to the pandemic ending as soon as possible. And, though we can’t gather together at a theatre just now, let’s avoid mental isolation by sharing our love of performing arts in different ways.

MIYAGI Satoshi and SPAC’s “Antigone” returns in triumph to Shizuoka.

The production was originally created by MIYAGI in response to an invitation from Festival d’Avignon for him and SPAC to stage the opening play of its 71st edition in July 2017 — the first time that honor was ever extended to a dramatist from Asia.

Ahead of the trip to Provence, as part of SPAC’s annual Open-air Performing Arts Festival under Mt. Fuji in May 2017, it presented a preview version at a venue in Sumpujo Park.

Then two months later, in the Cour d’honneur du Palais des Papes in Avignon with the palace’s 30-meter stone walls as a backdrop, MIYAGI exquisitely blended the titular heroine’s refusal to label people as being good or bad with the Buddhist way in Japan of treating the deceased as equal souls for whom no bitterness remains.

In September 2019 it was staged at the Park Avenue Armory in New York in the Official Program of Japan 2019, a showcase of Japanese arts and culture.

Visually, too, the production magically combined Japanese beliefs with Greek mythology, astonishing its largely European and American audiences with a shallow, boulder-strewn pond on which candles floated, and through which actors in white costumes moved slowly around — all beneath those massive ramparts onto which their immense shadows were projected.

Described as a “timeless and urgent … blend of the classical with the contemporary” in The New York Times, the play was selected by U.S. TIME magazine as the sixth-best production of 2019 — another extraordinary accolade for an Asian theatre company.

Now, for the latest, upcoming staging of MIYAGI’s “Antigone,” SPAC will create an open-air venue in Sumpujo Park almost the size of those in Avignon and New York. Though the play will be a co-hosted program in the TOKYO 2020 NIPPON FESTIVAL, it will run alongside SPAC’s annual World Theatre Festival Shizuoka and its fringe relation, STRANGE SEED SHIZUOKA, that happens around the city.

This famous 5th Century B.C. tragedy by Sophocles is set in Thebes in ancient Greece, the city where King Oedipus was exiled because of an incestuous secret concerning his birth — a secret that leads his wife, Queen Jocasta, to kill herself when she discovers she is also his mother. After that Oedipus steps down, telling his sons Polynices and Eteocles to share the throne, but the brothers quarrel and Eteocles expels Polynices to Argos. Before long, Polynices returns with Argoan warriors to attack Thebes, and the brothers kill each other in one-to-one combat — hence fulfilling a curse made by their father. With their deaths, Creon, a brother of Jocasta, becomes king and has Eteocles buried with great ceremony — but decrees that anyone trying to bury or even mourn the traitor Polynices will be executed. Nonetheless, Antigone, a daughter of Oedipus and sister of the brothers, decides to bury Polynices … although her sister Ismene warns her not to do so.

*Admission to auditorium is restricted to children of school age and over.
*Performances will be held even if it rains. As the use of umbrellas is not permitted during a performance, please ensure you have suitable rainwear. You are also advised to bring warm clothes for night performances at this time of year. 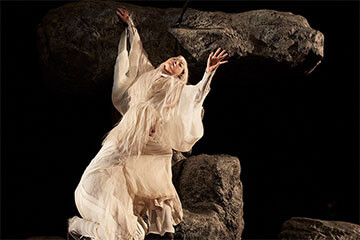 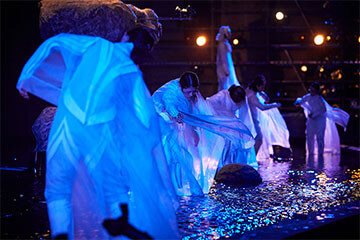 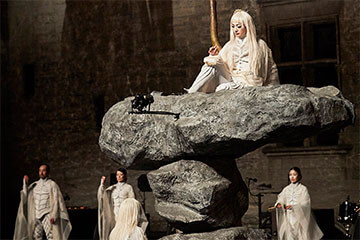 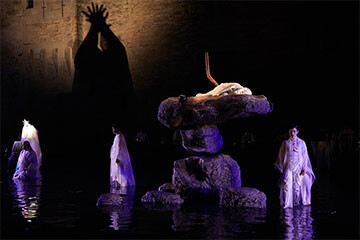 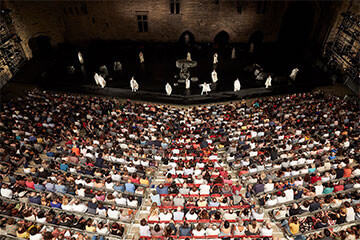 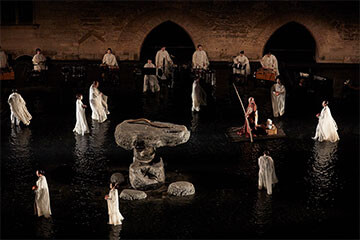 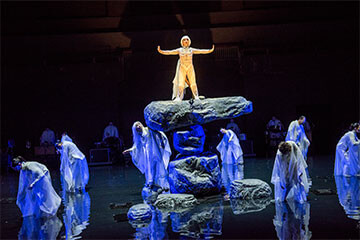 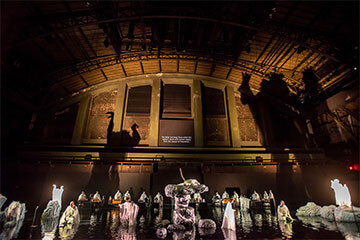 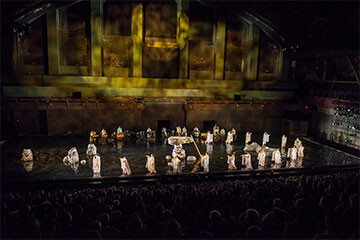 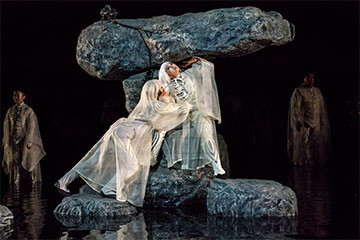 [Le Monde, 8 July 2017]
More than a background, it is an aquatic temple for words and bodies, an incitement to reflect about good and evil. A soft and generous beauty…

[The New York Times, 26 Sept 2019]
“A Spellbinding ‘Antigone,’ Both Timeless and Urgent (…) Eye-popping design is what we’ve come to expect from shows at the Armory, and this Shizuoka Performing Arts Center production, with an 18,000-gallon expanse of water, does not disappoint. What’s most extraordinary, though, is the visceral potency of Mr. Miyagi’s staging. Its particular blend of the classical with the contemporary renders the play — about a young woman who risks her life to defy the cruel dictate of a reckless, power-mad king — both timeless and urgent. Without any political overlay, it speaks directly to our rancorous present.”

[TIME magazine, 16 Dec 2016]
“Antigone” have been named TIME’s list of “The 10 Best Theater Performances of 2019”
It sounds overwhelming: a Japanese-language version of Sophocles’ nearly 2,500-year-old play, invoking elements of Noh theater and Buddhist philosophy, performed entirely in a pool of water. Yet it was spellbinding and probably the best concert I attended this year, thanks to mesmerizing accompaniment provided by world-class percussionists. 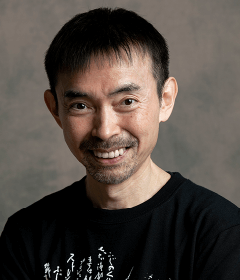 Born in Tokyo in 1959, after studying aesthetics at Tokyo University under ODASHIMA Yushi, WATANABE Moriaki and HIDAKA Hachiro, he founded the KU NA’ UKA theater company in 1990 and soon began staging plays overseas as well as in Japan. As a result, MIYAGI’s work — in which he often fuses contemporary textual interpretations with physical techniques and patterns of Asian theatre — has long been acclaimed both at home and far beyond. Indeed, in 2004 he received the 3rd Asahi Performing Arts Award, and the next year the 2nd Asahi Beer Art Award. Since taking up his position with SPAC in April 2007, MIYAGI has staged many of his own works — including “Medea”, the Hindu epic “Mahabharata”, and “Peer Gynt” — and has invited artists from abroad to present pieces casting a keen eye on the modern world as they see it. In line with his aim to make theatre “a window to the world,” he has also started a new SPAC-based project aimed at the youth of Shizuoka. In 2014, MIYAGI was invited to the Festival d’Avignon, where he received excellent reviews for his open-air version of the Hindu epic “Mahabharata” staged in La Carrière de Bourbon. Following that landmark achievement, the festival extended the honor of inviting MIYAGI to present a Buddhist interpretation he created of the ancient Greek mythological tragedy “Antigone” as its super-prestigious opening program for 2017. On that occasion, which was the first time an Asian play had ever been selected to launch the festival, MIYAGI’s exalted “stage” was the open-air Cour d’honneur du Palais des papes (the Honor Court of the Palace of Popes). By the play’s end, those towering medieval stone walls were ringing out with long and splendid standing ovations welcoming the work’s director and creator along with SPAC’s actors and staff — while more than 60 European media all gave great reviews. In 2018, he received the 68th Minister of Education, Culture, Sports, Science and Technology’s Art Encouragement Prize of Drama. Also he recieved “Chevalier de l’Ordre des Arts et des Lettres” from the Ministry of Culture of France in 2018.

SPAC was founded in 1995 by the Shizuoka prefectural government and commenced its full-fledged activities in 1997 under the direction of SUZUKI Tadashi, its first General Artistic Director. As a pioneer of publicly funded performing-arts organizations in Japan, SPAC retains its own staff of actors, technical and production staff, who are based at its own venues and facilities. The mission of SPAC is not only to create original pieces, but also to invite progressive artistic companies and creators to Shizuoka and to develop human resources seeking expression through the performing arts. Since April 2007, when he was appointed as the General Artistic Director, MIYAGI Satoshi has led SPAC in a buoyant new phase of development and expansion.

go to top of this page