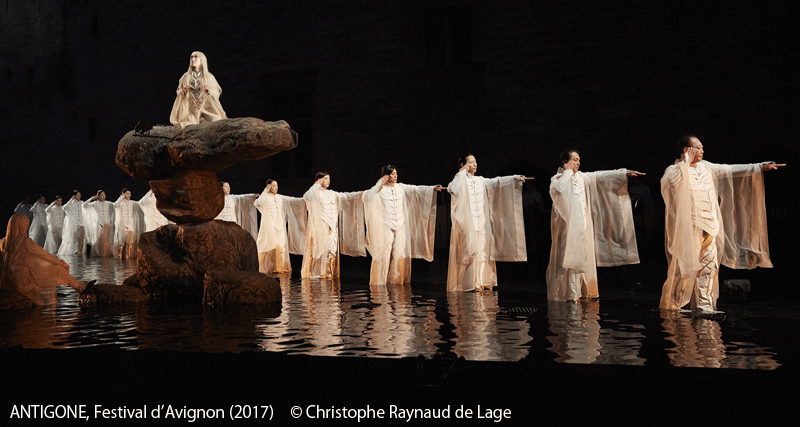 Two years after the international sensation it caused as the opening program of the world’s top arts festival, Avignon Festival, in 2017, ANTIGONE will set off on a New York tour!

SPAC is re-performing its most renowned work, ANTIGONE, as one of the official programs of the Japanese culture festival Japan 2019, which started in New York and Washington, D.C. in March 2019.
This program was originally performed at the Cour d’honneur du Palais des Papes as the opening program of the world’s top arts festival, Avignon Festival, in 2017. Its production caused a great sensation among viewers and critics with its ingenious stage devices, including a floor covered with water and massive 30-meter-high projections of the performers’ shadows on the wall of the Palais des Papes, as well as its story that contrasted the Japanese view of life and death with the non-binary worldview of the mythological Greek princess.

The program will be performed at the Park Avenue Armory in New York, a former military facility that is now used as a venue for live performances and installation art by the world’s top artists. Utilizing the vast space and the high arched ceiling, we will make the Wade Thompson Drill Hall into a stage of almost the same size as that in the Cour d’honneur du Palais des Papes, reproducing the watercovered stage and shadow projections on the wall.
What will Antigone’s worldview, which refuses to divide people into enemies and allies, offer to a U.S. audience which has long been exposed to social disruption? We hope you will get to see this new challenge that Miyagi and SPAC are about to take on.

Japan 2019, following on the successful Japonismes 2018 in France, aims to broaden understanding of and interest in Japanese culture in the United States through two programs: the Japan 2019 Official Program featuring a series of events co-organized or supported by the Japan Foundation, mainly in New York and Washington, D.C., and the Japan 2019 Associated Program, featuring affiliated events organized by public and private entities to introduce Japanese culture and promote exchange between Japan and the U.S.

Period: From March to December 2019


Also, SPAC’s Mahabharata – Nalacharitam was a great success at Japonismes 2018 as one of the official programs, selling out all 1,000 seats for all six performances.

The scene is in Thebes of ancient Greece. The previous king Oedipus is expelled from the country after discovering the secret of his birth. Jocasta, who is Oedipus’ wife and mother, kills herself. Their sons, Eteocles and Polynices, fight for the throne and Polynices is expelled to Argos. Later, Polynices attacks Thebes with the army of Argos. There, Polynices and Eteocles engage in single combat. Under the curse of Oedipus, both brothers die by each other’s sword. Jocasta’s younger brother, Creon, ascends to the throne of Thebes. Creon decides to respectfully bury Eteocles who protected Thebes, while decreeing that Polynices’ body is not to be buried in order to let wild birds feast on it, on the pain of death. However, Oedipus’ daughter Antigone defies the order, despite admonitions from her sister Ismene, and decides to attempt to secure a respectable burial for her brother Polynices. 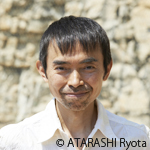 Records of ANTIGONE at Festival d’Avignon 2017 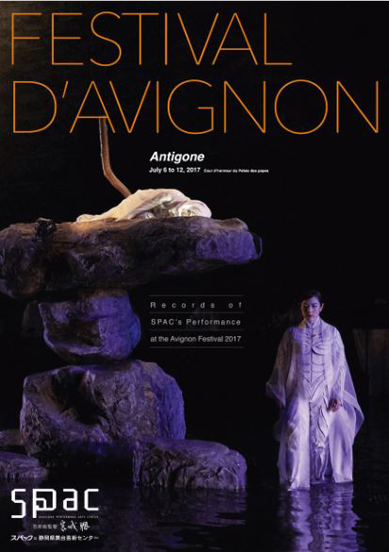